Haywood County Facilities are closed to the public. Extension is available by phone, email, and appointment only.

Find this article at:
go.ncsu.edu/readext?677566
— Written By Bill Skelton

Honey is a food and sweetener that has been valued for many centuries. During medieval times it was highly valued and sought after. As such hives were mostly owned by the Church. Honey bees and their bees wax and honey were so valued that they are listed on the cargo of the pilgrims’ ships. Today, honey bees are kept by anyone willing to learn about this creature, seeking pollination for their fruit and vegetable gardens, or wanting a little bit of that wonderful honey! 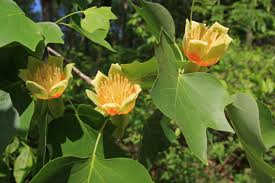 Like wines, honeys can have a variety of flavors and aromas. It all depends on the source of the nectar the bees collect and when the beekeeper harvests the honey. Here in western NC, the primary nectar sources include locusts which blooms late April, Tulip Poplar (shown here) blooming in May, and then the most sought after nectar source is the Sourwood which blooms in July.

That said, the Tulip Poplar provides the primary nectar flow for honeybees to make surplus honey. The Poplar will start blooming about May 5-7 here in Haywood County so beekeepers need to be getting their hives and honey supers ready for action. By now, established hives are hopefully full of bees just looking for something to do…hives have to have a lot of bees to make surplus honey. Beekeepers will also need supply a place for all those bees to store the nectar and dry it down into honey, these parts of the bee hive are called supers. If beekeepers want to make honey they need to get those honey supers on their hives by the end of the first week of May! By the end of May the bees will have turned the nectar into honey and beekeepers will be harvesting that liquid gold…find a beekeeper and line some up for yourself!